It’s hard to believe that there are places in this country with no recycling options available to them. It seems to me that recycling is a basic service. It should exist everywhere, and sometimes it seems like it is everywhere.


Current data suggests that curbside recycling serves half of the U.S. population. Another third of the population is suggested to be served by drop-off recycling facilities. While nearly 86% of Americans have access at the curb or within 10 miles of their home, we still see the nation’s recycling rate is stuck at 31 to 34% depending on whose numbers you use. We aren’t the best recyclers in the world, believe it or not.  We aren’t even second best. How about third, fourth, fifth? Nope. Would you believe seventh among developed countries? Creating 4-7 pounds of waste per person per day, we have a lot of room for improvement. Hey, maybe we can start with providing recycling nationwide? Maybe, too, the recycling programs are the same, no matter where you go. This would take a lot of the confusion out of it, that’s for sure. And confusion about what is acceptable is a leading cause of people not recycling. 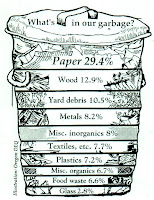 
Without doing too much math, I would think that if all of the people in the 86% of the population with recycling available to them were recycling and composting just 50% of that 72% we could increase our diversion rate tremendously.
Let’s start a movement! If you don’t have acceptable recycling options in your area, contact your local officials, get a petition going, and show your local government that residents do care and are committed to using resources responsibly.
Posted by Marie at 10:21 AM